No tests found for Java nor JS

I’ve written some tests for Enonic XP controllers and Java code in a XP project. Everything has worked up until now.

So after trying to get things to work, I’ve tried deleting all the tests to see if there was en error with the dependencies or the tests themselves. I set up a new test case for a controller which only asserts true with a package layout like this: 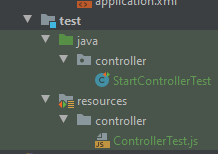 What have I done wrong? I’ve tried to invalidate chaches and restart IntelliJ, deleted different dependencies, deletes .gradle and deleting the entire project and clone it off of the repo again.

After rebasing at a previous commit, where the tests worked, everything seemed to work out like it should. There were no significant changes that would affect dependencies from those commits. Don’t know if it was a gradle issue or not.

Thanks for the answer! Will try to update to the newer release as well!