Vue.js and replacement for data-portal-component attribute

I’ve integrated Vue.js to my enonic CMS, and because of that im having a harder time using thymeleaf attributes because of how vue injects content to the body.

What I need is to be able to get each part inside a region and manually insert them to the region because the data-portal-component attribute does not work for me either. Is there a way to replace this functionality in javascript? What tools do i use?

If there is a way i can use the data-portal-component with Vue.js id be happy to learn how!

It can certainly be done, but I don’t know if someone has done it before like what’s been done with the React4XP library and starter, or if you need to implement this yourself. 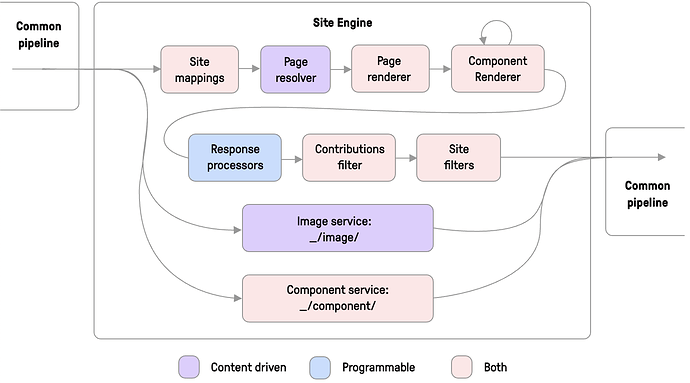 The data-portal-component is the link between the “Page renderer” bubble and the “Component Renderer” bubble. But all this is happening server-side before the HTML document is delivered to the browser, while Vue.js is running client-side, i.e. after the Common pipeline in the end of the diagram above. So you have three options:

If you have the time, I would recommend looking into how React4XP has solved the same predicament for those who want to integrate React apps into the Enonic XP site engine pipeline, following option #2 above. React4XP lets you run React code server-side, essentially letting you write code for parts using React as if it were regular JavaScript.

So if nobody else in this forum has any experience with integrating Vue with enonic that they can share here, I would recommend first trying a simple hard-coded proof of concept of option #3, and then either continue along that route or if you feel inspired: go for the more elegant option #2 similar to what has been done with React4XP.

I hope these answers have been useful, even though I don’t have experience with Vue myself.

Hi! A bit more info on your use case would be helpful. Are you looking to render Everything frontend using Vue? A more specific example would help.